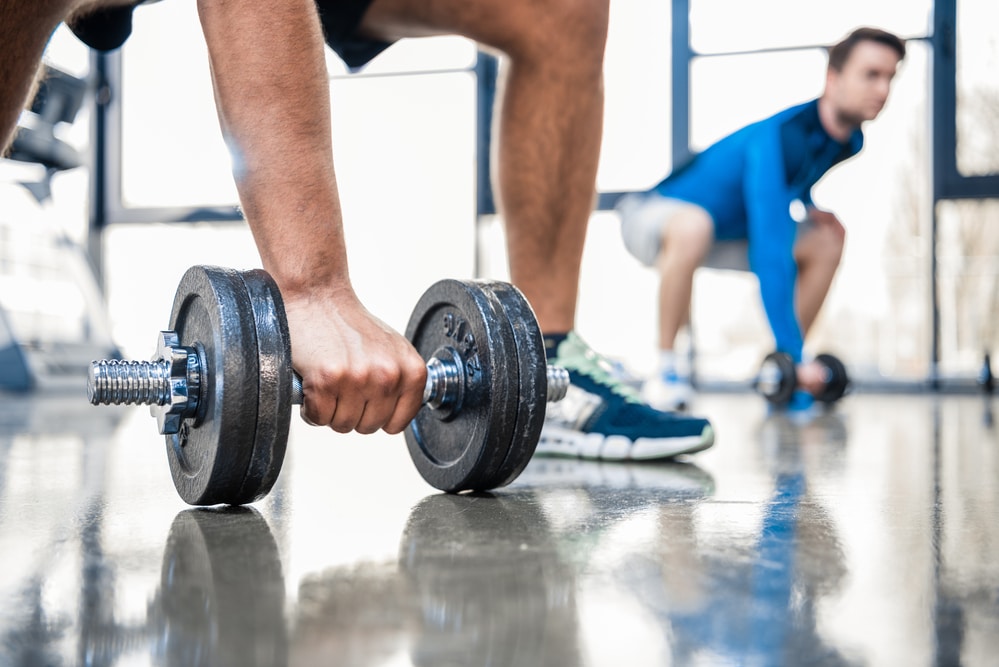 Exercise variation is an inherent positive for athlete development and rehabilitation.

Anyone who has spent any time in a gym has done their share of squats, bench presses and dead lifts. These are the “core lifts” for good reason. They are integrated, multi-joint movements. They train the athlete in proper coordination patterns, setting the foundation for a wide range of athletic movements. There’s a place for these lifts in every sport and at every stage of a season or long-term development, including rehabilitation.

However, all exercises have trade-offs.

Any exercise involving a barbell constrains the athlete. Each of these three lifts locks the thoracic spine into a fixed position, which sets off a cascade of adjustments and limits the athlete to one plane of motion. Very little that happens in sport or life is so narrow. The bench press also requires the athlete to be in a position that is not relevant to any sport, and that entirely constrains their torso. Finally, the back squat places high compressive stresses on the spine.

Using exercise variation, and adding variations to these lifts is an easy way to get the benefits (and more) with less risk and higher return.

Our understanding of how people learn and acquire motor skills has improved a lot in the last two decades.

Strict repetition – “do this until you get it right, then do it 20 more times so you’ll remember it!” – is an ineffective way to learn, and it’s an ineffective way to remember. And since very few activities in sport or life happen the exact same way every time, it’s not a good way to prepare athletes for what they will face. In teaching terms, it fails the retention and transfer tests.

Neither of those emotions are good for learning.

We do our best learning from satisfying situations. Chua et al (2019) found that randomly changing the order of a throwing task throughout the practice sessions increased people’s retention and transfer.

The more varied the order–the more exercise variation–the better the results. For example, throwing from distance A, then distance C, then A again, and then B, helped the participants do better than those who threw AABBCC, for example.

The researchers speculated that the random order kept people more alert and interested in the task because they couldn’t settle into a routine. Each unexpected variation created a new challenge, even if the basic task – throwing a ball at a target – was fundamentally the same.

When we have a novel task to occupy our attention, we focus on what we’re trying to accomplish (Lewthwaite 2016). If we’re doing something we feel we know well, we start to look internally, at the nitty-gritty of how we’re doing things rather than what we want to do. This is where performance starts to drop off, even from a previously high level, and where transference to new tasks stops.

The more movements we learn, the better we are at any one of them, and at ones we haven’t tried yet. Even subtle differences between two repetitions – the kind that happen as we lighten the constraints on our movement – can reinforce our skills.

Here are a few ways coaches can seed new challenges into the core lifts and implement exercise variation, opening the door for wider skill acquisitions throughout a training program.

Variation #1: Dumbbells instead of barbells

Each of these exercises can be performed with dumbbells instead of barbells. This instantly adds more freedom of movement, particularly in the thoracic spine, allowing variability and more natural movement patterns.

Using dumbbells for a chest press challenges the stability of the shoulder, the most freely moving joint in the body. Unlinking the arms allows for independent movement and coordination between the two sides.

This is much more relevant for a pushing task in sport: when two linemen collide at the line of scrimmage, their arms are not going to be evenly spaced for more than a split second. One hand will be higher, one will be lower. One hand may face quick and specific resistance from the other player’s hand, while the other faces broad and more stationary resistance from pushing against the opponent’s chest.

For the deadlift, dumbbells allow an athlete to tilt or lean more towards one side than the other. Those movements can reveal improper coordination patterns that could affect performance or lead to injury, and give the coach an indication of where to target future work.

Variation #2: Single leg (or arm) instead of double

The back squat has high transference to a lot of other movements, but is not specific to many. Other than a rugby player pushing out of a scrum, a football lineman exploding off the line of scrimmage, and the occasional two-leg jump in basketball or volleyball, few athletic movements mirror the squat.

Most of sport and life is played on one foot, so single-leg squats provide more specificity. Part of that specificity is how much more single-leg squats challenge the athlete’s balance and postural control. Those factors are crucial in injury prevention and rehabilitation. Being on one leg presents new problems for the athlete to solve, and how they solve them may differ based on their injury history and compensation patterns (Roos et al 2014).

Single leg dead lift variations go even further in the balance aspect. The athlete is using his hip as a pivot point that can move in almost any direction, rather than as a hinge that only goes forward and back as in a standard dead lift.

In a bench press or dumbbell chest press, both arms move together. In a single-arm chest press, the athlete only has a dumbbell in one hand, while the other rests on his hip or leg.

This makes more movement available to the torso. As the exercising arm moves away from the body, the torso can rotate a little – the press becomes like a punch. As a result of that added movement, the relationship between the weight and the shoulder is changing throughout. This increases the action of the stabilizing muscles, and makes the exercise more transferable.

Visual input is a major contributor to our sense of postural control and balance. We feel stable when the world around us looks stable. This is why we tend to lock our focus on a single spot during a balance task.

During squats, dead lifts and chest presses, most athletes look at the same thing. For squats and dead lifts, many coaches cue their athletes to look up during the eccentric and concentric movement, and look straight ahead only at the top of the movement. During the bench press or chest press, they’ll follow the movement of the barbell or dumbbells.

All of those visual reference points stabilize their balance and posture.

But we’re looking to challenge their balance and posture. In a game, they may be looking over their shoulder as they cut inside on a route; or they may be trying to create misdirection by moving one way, looking at a teammate in the other direction and then slipping a pass straight ahead. Back home, you may be carefully stepping over your dog when there’s a loud noise from the other room, and now you, too, have separated your visual input from your postural control and intended movement.

When performing any of the variations above, the coach can direct the athlete where to look. During the set, she can say things like “Look to the door… look at me…. look over towards the poster… eyes to the ceiling…” Or she can tell the athlete to scan the surroundings, never fixing the eyes on anything unless he needs a “safety point” to catch his balance.

Contact us at Athletes’ Training Center with any questions you have about exercise variation or to schedule an appointment with one of our performance coaches or physical therapists!

Change of Direction is More Than Agility: Training the Eccentric Movement