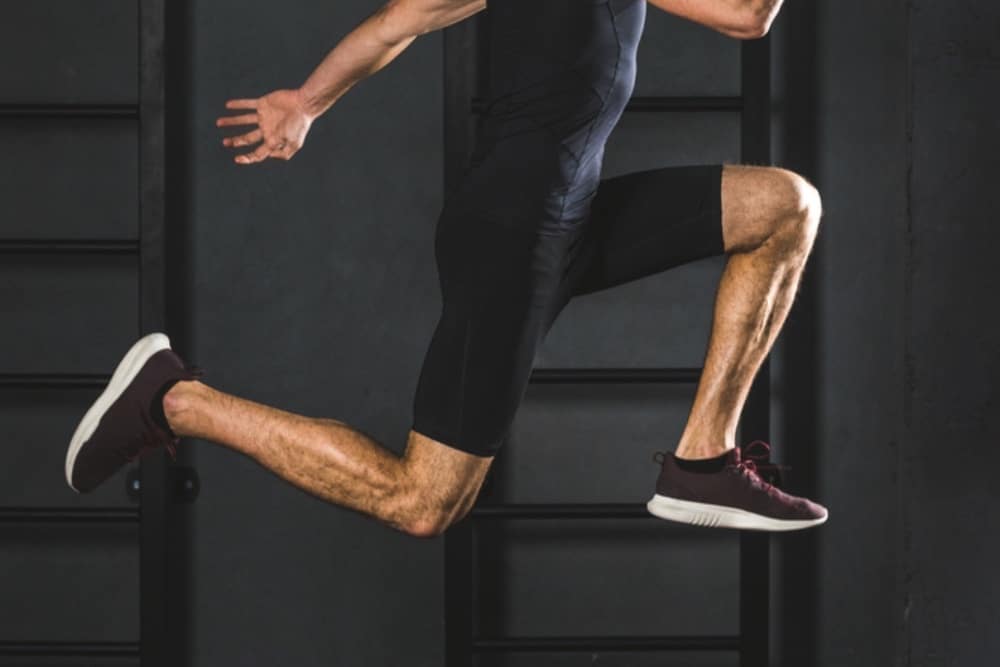 Fans can recall their favorite Michael Jordan dunk, Cristiano Ronaldo header or Gabrielle Reece spike. But we don’t often remember what happened immediately after the dunk, header or spike for the same reason we remember those highlights: those athletes jump and land so well that we can forget just how important and challenging the landing can be.

Sometimes, though, we do remember landings. Kerri Strug’s landing made her an Olympic legend, and everyone lost it when Katelyn Ohashi nailed the final landing in her floor routine.

That’s because gymnastics is the only sport where an athlete lands, and then does nothing else. And even in gymnastics, those are rare. A single tumbling pass in a floor routine can have five landings, but the only one most people pay attention to is the outlier: the last one. Every other landing passes by in a blur because it’s right into the next move, just as it is in basketball, soccer, volleyball and any other sport.

Landing from jumps is one of the most common causes of anterior cruciate ligament (ACL) injuries. ACL injuries resulting from a jump normally come from a single-leg landing. The instability and extreme forces combine to be more than the supporting muscles can absorb and counter. The ACL is left exposed, but it’s all more than the ACL can be bear.

Reducing the risk of these injuries requires us to train for the kind of jumps an athlete will do in his sport, as well as building in the uncertainty that every activity carries.

Two Parts to Every Jump: Take-Off and Landing

Training for a jump and the landing requires the coach and athlete to look at what usually comes before and after a jump in their sport.

Dr. John Harry at Texas Tech University led a research team that examined how jump and landing mechanics differed between the positions on a soccer team (Harry et al, 2018). Attacking players have the benefit of planning their jump on offence. The striker watches his teammates pass the ball while he gets into position to come around the defender and plan his jump to head the incoming cross towards the goal. The defender has much less time: he sees the cross coming in, and he needs to take a step or two and get into the air immediately to prevent a clear header from the striker.

Many studies have found that the take-off mechanics affect the landing mechanics. Therefore, the defender and the attacker will land differently because they took off differently, even if they may have a similar vertical jump height when doing testing in the gym (Afifi & Hinrichs, 2012).

Dr. Harry and his group found that defenders – those who are most reactive in their jumping – generate higher ground reaction forces upon landing than midfielders and attackers. But the defenders were also more efficient in reducing those forces. That ability is both a self-protective mechanism from an injury perspective but also a way of quickly preparing themselves to move to their next position in the play.

Different Jumps Will Have Different Landings

Volleyball is another sport where the position shapes the jump. A player going up for a block comes closest to a “laboratory grade” jump: take off from two feet, arms overhead, land on two feet.

A player spiking the ball, though, is doing something with many more variables. The outside hitter will start her approach when the setter sets the ball. She will take a short run up, take off from two feet and then, after the spike, land on one foot quickly followed by the other. And not only is she landing on one foot, but her upper body is still rotating from the follow-through of the spike: her whole body is moving in one direction when the foot hits the ground, but part of her body is moving in another plane of motion at the same time.

More than that: she is landing on her non-dominant, “weaker” side. Volleyball players will spike with their strong hand, and the mechanics of the spike mean they land on the opposite foot.

Unsurprisingly, then, research has found significant differences between the forces experienced by each leg upon landing, and in the overall movement of the body, when comparing the landings after a spike. Studies have even found significant differences within the same athlete depending on how far behind the point of the spike they jump: a jump with a longer horizontal component (one that starts further from the net) puts a very different pattern of forces on the body than one that is more vertical (Marquez et al, 2009).

The athlete needs to be trained to handle all this safely and effectively, in addition to being resilient enough to react to anything that goes wrong.

How to Train Your Landings for Any Sport

The first step to training proper landings is simply to include the full cycle of a jump: jump, land and then the follow-on motion.

Unless we are working with a gymnast, it doesn’t do us any good to have our athletes stick the landing. Likewise, we need to make sure they are landing from the heights they will reach in the game. Unless we’re working with a high jumper, we need to make sure the athlete comes down as well as goes up. And even though drop-jumps have their place in eccentric training, we should remember that they do not necessarily transfer to landing from in-game jumps: how we land from a drop-jump is different than how we land from a real jump because the drop-jump, despite the name, is all drop and no jump.

This makes the common box jump routine doubly misleading: the athlete sticks the landing, and it’s not even a “true” landing because the vertical forces they experience are generated from only a few inches of drop – the distance between their peak height and the box.

Second, like all training, we train jumps in all planes of motion, double leg and single leg. This teaches the body to generate and absorb forces in multiple planes and different directions with different capacities.

Third, we must give the athletes the right cues and instructions for how to land (Harry et al, 2019). Landing is as much a skill as jumping, perhaps more so since landing requires the athlete to work against greater forces.

The athlete should have an external focus of attention when they are landing, something to think about other than their body. “Land as quietly as you can” or “When you land, push off hard to the left as you take off towards the cone on your right.” These sorts of instructions produce better results than directing the athlete to take conscious control of their body, by saying, for example, “Bend your knees as quickly as you can upon landing.”

Research has found that athletes who are given external foci of attention have better scores on an assessment of landing mechanics that is commonly used to predict the risk of ACL injury (Welling et al, 2015).

Finally, we should not shy away from instability and variation.

When an athlete is in midair doing the drill above, don’t throw the ball perfectly to him. Make him reach out to the side, behind him or at his knees to catch the ball – not every pass or rebound will be right where he wants and expects it in a game.

Or, when someone is doing a jump, give them a gentle push in midair so they land a little off-balance. In everyday life, if we find ourselves in midair we probably didn’t plan it, so we need to be ready for a landing we didn’t plan, either.

Soccer fans around the world marveled at Cristiano Ronaldo’s header in December, but the sports science and rehab communities marveled at his landing. It was pretty awful, given that while he was hanging in the air a defender made contact with his lower body. The angles and forces involved probably should have damaged any number of structures in his knee. But he has spent years jumping, landing and moving directly into other movements. He has built up such a store of variation that anything new simply adds to what he can do, rather than subtract.

Most of us will never jump 28 inches. But day to day, we never know how we might need to land. We just need to land in control, and if not in control, with enough resilience that we’ll be able to bounce right back up.

We may not be able to jump like a pro athlete, but we can all learn to land and fall just as well as they do.

Afifi, Mostafa & Hinrichs, Richard. (2012). A Mechanics Comparison Between Landing From a Countermovement Jump and Landing From Stepping Off a Box. Journal of Applied Biomechanics. 28. 1-9.

10 Things We Treat Besides Shoulders