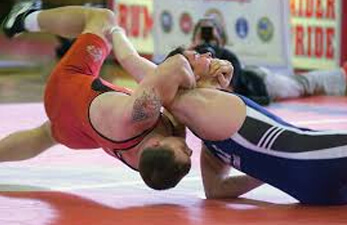 Double chicken wing in Folkstyle, arm throws in Greco, or an athlete desperately bending his shoulder in an attempt to avoid getting turned… no doubt about it, wrestlers get put into compromising positions that put extreme forces through the shoulder joint.

Shoulder stability training is very important in many overhead throwing sports, but is often neglected in wrestling.

Actually, shoulder injuries are extremely common in wrestling and can account for up to 1/4 of all injuries seen. If the shoulders are not properly warmed up and regularly challenged with stabilization exercises, that risk of injury increases.

Let’s discuss the need for shoulder stability and some “must have” exercises to incorporate into your warm-up routine.

First, shoulder “stability” is NOT big lifts, stacking weights on the bar, or grabbing the biggest dumbbell possible.

First, shoulder “stability” is NOT big lifts, stacking weights on the bar, or grabbing the biggest dumbbell possible.  Shoulder stability is having your arm in a compromising position (falls on an outstretched arm, opponent pulling your arm behind, using your shoulders to pull sprawled legs…) and being able to control it with force; overhead or to the side. Due to the variety of compromised positions a shoulder can be in, it is important shoulder stability exercises include stability work in multiple positions and angles.

Wrestling practices are designed with multiple live scenarios which, while only in short bursts, create increased exposures which give opportunities for injury. Injuries in wrestling occur at a high rate and only second to football per 1,000 exposures.  Not being warmed up and increased fatigue at the end of practice are when the joints and musculature are most at risk.

Here are 6 quick shoulder stability specific exercises to use as a warm-up prior to practice or a match.

If you are a wrestler, I encourage you to take the time and invest in your shoulder stability. Not only can it impact your ability to compete now, it can also have a lasting impact on the future of your shoulders. Let’s not be reactive to injury, but let’s be proactive to prevent it.  In fact, reach out to us at Athletes’ Training Center to see how our sports performance programs address injury through prevention strategies, in addition to building speed, endurance, and power.

How to Self-Diagnose Your Athlete’s Arm Pain

3 Common Push Up Mistakes & How to Correct Them