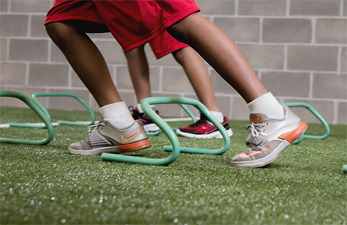 Are We Missing the mark as Parents and Coaches?

I have the great fortune to be around sports every day.  Professionally I work with young, injured athletes and help them get back to competing with their teams again.  Personally, I have a young son who has started the process of playing organized sports.  Being a physical therapist for many years, I am in a unique position where I have contact with a variety of different people and organizations that are involved in a vast spectrum of sports all across Omaha.

Because of this I get to hear about what teams are doing for practices and games. I receive newsletters on what my son’s organization is up to. I coach and collaborate with other coaches across multiple organizations. And I get to see first-hand, the intention of the coaches and organizations to make kids better at that respective sport.

But, I have to admit at times I find myself wondering if sometimes we as parents, coaches, and organizations get so caught up in helping and motivating our kids to become better athletes that we miss the mark in what they need from a health perspective at their young age.

To illustrate why these thoughts have come about, let me give you some examples.  Recently, I was speaking with a dad who was telling me about the great success his son’s U9 baseball team had that season.  I do not remember their exact record but it was something like 56-7.  My first thought like probably everyone else was, “wow, those kids crushed it this year!”  But then it struck me, these are only 8 and 9 years old kids, and they just played 60+ games of baseball.  Not only did they play 60+ games of baseball, they also practiced a couple times every week beginning months before their first game even started. I have no doubt in my mind these kids improved their baseball skills,  but I have to wonder if practicing for that length of time and playing that many games was the best thing for a group of kids that age.

The second example comes from a conversation I had with a 13 year old injured athlete. We were in the clinic one day discussing all of the sports she was currently playing.  She was doing “off season” indoor soccer mixed with footwork for her select soccer team in addition to being “in season” with her select basketball team. She told me she was doing 3 or 4 90 minute practices a week along with playing multiple games between the two sports every weekend.  I get it she loves sports and being with her teammates.  But again, I wonder if her best interest was being served playing two select sports at the same time.  I have a hunch that she was over-doing it since she was sitting in my office hurt.

There is no research out there in the medical community that says for any certain age an athlete should play sports “X” number of hours a week. It is simply impossible to measure.  It honestly boils down to common sense.  In both examples, the athletes were being over-trained.  There were signs and symptoms of it happening that were not picked up on.

9 Common Signs and Symptoms of Over-Training.

1. Personality and Mood Changes – As the U9 dad said “my kid was an a*#hole for a month at the end of the year.”

2. Lack of Enthusiasm – especially toward the sport but could be toward general events as well

7. Decreased Immune System – seems to be getting sick more easily or can’t recover from minor illnesses

8. Persistent Muscle and Joint Soreness – Don’t be fooled, there is no such thing as growing pains

Youth sport seasons are getting longer and more compact.  On top of that, our kids want to play multiple sports; but in doing so their sport seasons tend to overlap more.  And now here we are, heading down a path where our young athletes have little to no break and they can’t physically, mentally, or emotionally recharge.  I can tell you from professional experience, over-training is a reality in our community.  Look for these signs to help you know if your young athlete is at risk.

Question: As a parent, what steps can you take to make sure you’re catching these 9 signs?

5 Reasons to Prep For Football During Baseball

10 Things We Treat Besides Shoulders